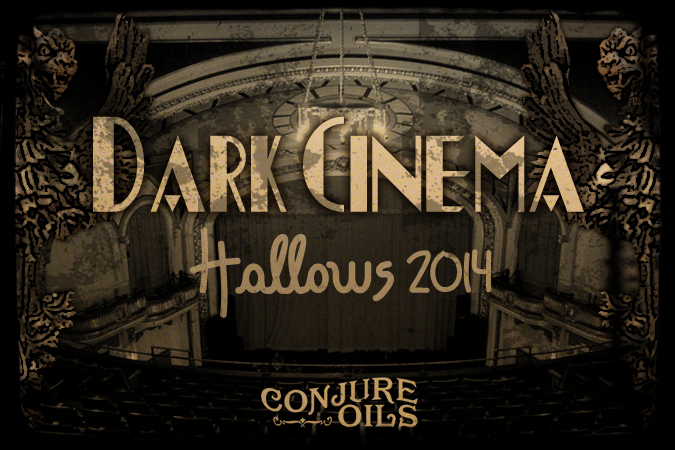 Films from the 1920's. German Expressionism at its best!

A study in grayscale: black and white musk, black currant and white pepper.

The supernatural elements of the 1930's Old Dark House style of movie were usually not supernatural at all but, spoiler alert, usually the doings of the rich inhabitants. And they would have got away with it if it wasn't for those meddling kids!

One of the legendary monsters from the horror world who deserves a scent of his own!

Reanimated and ready for revenge!

Electric notes of ozone and wet stone. Ponderously earthy with a tinge of bittersweet innocence.

Straight from the tomb to spread Egyptian terror to your nightmares!

Clap for the Wolf Man! I saw him having a pina colada at Trader Vic's. His hair was perfect. Transform into something wild!

Weird, otherworldly. It's either giant sized, radioactive, alien, or all three. The wail of a theremin and bulky latex monsters. Definitely a commentary on the age of atomic insecurity of the 1950's.

It's all fun and games until you realize there was a triple homicide at your favorite vacation spot! Invokes films such as Psycho, The Shining or Amityville Horror.

All the trimmings of a perfect house: fresh mown lawn, fresh air and sunshine overshadowed by something absolutely sinister.

Combine the grunge of a bad roadhouse movie with a freewheeling view of human monstrosity and you've got a Hell of a flick. Add in some porn-staches and boobs for good measure.

Sleazy booze, cigar smoke, booze, maybe a hint of something green and illegal… and blood. Lots and lots of blood. Did I mention the booze?

A hell broth of the waters of Camp Crystal Lake, the steamy hiss of a boiler room and a dark Halloween night of crisp leaves and doom.

Don't flinch! The basest of human cruelty displayed for all to witness.


THE GHOSTS OF HALLOWS PAST - RESURRECTED 2014


A GYPSY FLAME 2014
A gypsy flame in on the hearth,
Sign of this carnival of mirth.
Through the dun fields and from the glade
Flash merry folk in masquerade--
It is the witching Hallowe'en.

Pale tapers glimmer in the sky,
The dead and dying leaves go by;
Dimly across the faded green
Strange shadows, stranger shades, are seen,--
It is the mystic Hallowe'en.

Soft gusts of love and memory
Beat at the heart reproachfully;
The lights that burn for those who die
Were flickering low, let them flare high--
It is the haunting Hallowe'en.

ABANDONED MORGUE 2014
Are you here on a dare and wishing you weren't, or is this your new nightly haunt? Either way, this old abandoned morgue has many stories to tell. Tonight we'll listen intently with the lights out!

THE AUTUMN WIND 2014
The Autumn wind — oh hear it howl!
Without — October's tempests scowl,
As he troops away on the raving wind!
And leaveth dry leaves in his path behind!
Without — without,
Oh hear him shout.
He is making the old trees bare;
Oh cruel, he,
To the old oak tree,
And the garden hedge so fair!
Oh, a wild and tyrannous king is he,
When he playeth his frolic in every tree.
And maketh the forest bare!

Excerpt from Halloween; a romaunt, with lays, meditative and devotional by A. Cleveland Coxe, 1845

1 Thrice the brinded Cat has mew'd.

1 Round about the Caldron go:
In the poysond Entrailes throw
Toad, that under cold stone,
Dayes and Nights, ha's thirty one:
Sweltred Venom sleeping got,
Boyle thou first I'the' charmed pot.
All. Double, double, toile and trouble;
Fire burne, and Cauldron bubble.

2 Fillet of a Fenny snake,
In the Cauldron boyle and bake :
Eye of Newt, and Toe of Frogge,
Wooll of Bat, and Toungue of Dogge:
Adders Forke, and Blinde-wormes Sting,
Lizard legge, and Howlets wing :
For a Charme of powrefull trouble,
Like a Hell-broth, boyle and bubble.
All. Double, double, toyle and trouble,
Fire burne, and Cauldron bubble

2 Coole it with a Baboones blood,
Then the Charme is firme and good.

Excerpt from Macbeth by William Shakespeare, 1603-1607

KILLER KLOWN 2014
No rest for the wicked! The darkness of the Dot Room gives way to a brightly lit funhouse of warped mirrors, garishly painted arches, and flashing strobes. In the smoky chaos, yellow-fanged mad clowns dart, popping out of the peripheries with honking horns, crazed laughter, or bloodied hand tools. Withered corpses bound cruelly into exaggerated poses line the walls, mimicking tight wire acts, animal tamers, and side-show acts, each one more nightmarish than the next.

MARA 2014
Mara is the Buddhist personification of Evil. Also known as Papiyan, ("more wicked") Mara (meaning "thirst" or "death") made every attempt possible to deter Siddhartha on his path toward Enlightenment by using armies of temptations such as: lust, hunger, thirst, sloth, cowardice, pride and fame, among others.

MURDER OF CROWS 2014
Every fall they gather in murderous shrieking clusters blacking out the branches in the oak and apple trees across the street. They caw and cackle in a long-overdue maniacal avian family reunion from Hell.

OL' SCRATCH 2014
Ol' Scratch is a folksy epithet for Satan originating out of the legends of New England in the days before the Civil War. Some other pet names for the Prince of Darkness (other than Ozzy :D) are Old Nick, Old Bendy and Rodger (as in Jolly).

SUCCUBUS 2014
A demon who takes the form of a gorgeous human female specifically to seduce men. Like the incubus, the succubus may have been a scapegoat for infidelity or stray lust. Either way, the succubus has captured the imagination of men for ages, rousing all flavors of fear and fantasy.

VORTEX TUNNEL 2014
You lose your unholy pursuit in the corn, finally reaching the safety of the lights you saw in the distance… only to find out someone has set up a carnival out here in the corn. The music piping from inside the great tent is cheery, but somehow off and disturbing, the notes off key and cracked turning their perky melody into a tune of complete derangement. A gaunt man in a ringmaster's costume stands by the entrance, accompanied by a shapely woman in spangled tights and a very nearly blank doll's mask. He grins wickedly, beckoning you to pass through the curtains held by his assistant and into the swirling darkness within.

Inside, you find yourself on a narrow walkway inside a tunnel painted with crazy psychedelic patterns. The motion of the tunnel makes the walkway twist and writhe, all but forcing you to close your eyes just to get through this fun-house of terror without falling down.

WENDY'S WICKED ICING 2014
Wicked witch Wendy has whipped up a batch of her royal icing!

WITCHING HOUR 2014
A midnight walk through the pumpkin patch on All Soul's Eve.

Spiced pumpkin, falling leaves, a black velvet cloak to pull close for warmth and a frankincense candle offering for the spirits residing in the nearby cemetery.

YUKI-ONNA 2014
The white woman bent down over him, lower and lower, until her face almost touched him; and he saw that she was very beautiful,--though her eyes made him afraid.

Happiest of Hallows, ConjurePunks! Thanks for your support!