I've been working on the site update for a couple of days now and was starting to get bleary, so I failed to add the options to select the Passionate Perfumes in the Oddment Emporium!

Well, now it's fixed. You may need to press F5 to refresh the page if they don't appear.

If you already placed an order and would like to add them let me know at madv at conjureoils.com and I will  invoice you, or go ahead and make a second order and I will refund you the extra shipping charge.

Sorry for any confusion or inconvenience this may have caused! 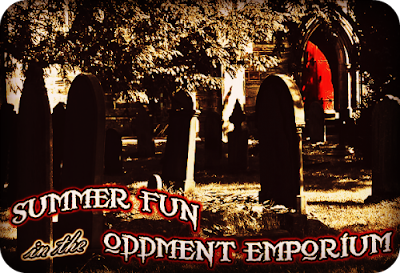 Hello Everyone! It's summer in the Oddment Emporium! And with that, we're offering these six sexy selections in multiple formats! From 5ml bottles of Passionate Perfume to 8oz of Wicked Whip, you can slather yourself in layer after layer of sizzling summer sexiness!

HELIOPHOBE
This one is for all the gingers, pale kids, freckled fiends and sun fearing folks out there! Cooling and refreshing!

MIDNIGHT
Escape from the burning heat of midday.

"This is our time, the night's our day
We'll dance this fading life away."

-Abney Park "The Wrong Side"

POTTER'S FIELD PICNIC
Grab your besties and your beasties, some delicious nosh, your favorite beverages and hand pick a bouquet of wildflowers for the ancestors. It's time for everyone's favorite high school pastime - a twilight picnic in the cemetery!

SOL NIGER
In the alchemical Great Work, or Magnum Opus dating back to the first century, Sol Niger (the Black Sun) is the first phase in the physical and spiritual transmutation that creates the Philosopher's Stone and leads one on a journey to individuation. In stage one, we're met with putrefaction and decomposition. Carl Jung attributed this stage two distinct psychological states.

In the first state, we have unio naturalis, a state of imbeddedness where the ego is enmeshed with its surroundings. Here there is no separation between the self and the other. "Ignorance is bliss" is a good way to describe this realm.

In the next state, nigredo or the blackening, we find the dark night of the soul where one becomes acutely, painfully aware of the separation between the self and the other. This gives rise to the recognition of the shadow self and the chaos and melancholy that comes with it.

However, all is not lost to despair! This darkness gives way to the next stage, albedo, the light at the end of the tunnel and the ascent from the depths of darkness. But that is another Sol for another day...

VOLUPTUARY
A devotee of all things luxurious and pleasingly sensual.

On June 23, we were treated to the magick of a super moon! As she travels in her elliptical journey around the earth, there is a point in the moon's orbit where she is closest to the earth, or perigee. To those of us admiring the moon from earth during this time, she appears 14% larger and 30% brighter, the tides are at their highest and with the human body being approximately 60% water, one can only imagine the influence the lunar tides have over us all!

Thirteen essences sacred to the moon were used to craft this fragrance. It can be described as a mysterious lunar philtre that is as invigorating as the night air and enchanting as a moonlit dance. PERIGEE can be used to alter consciousness in sacred circles, as an anointing oil for intense spell work or used as a fragrance when you need an extra spark of enchantment!

In a sacred space, the components were lovingly combined in a crystal vessel, corked then left outside to be exposed to the energies of deep night and moon at her fullest. In the morning, I decanted PERIGEE into 23 5ml brown glass apothecary bottles and then tucked away in a dark cupboard keeping them from the sun's rays.

PERIGEE will be shipped to you protected in a black bag that has a beautiful lunar amulet hand stitched to it. PERIGEE really is a work of art made with skill and love and destined to be a staple in your or a loved one's magickal cupboard,

Have a gorgeous summer!
Vajra and CO
Posted by Vajra at Monday, June 24, 2013 No comments: