I hope you are well. I just want to start out by saying thank you. It's been a year since Conjure Oils has been open for business offering the world their unique perfume and ritual oil blends. I know that there are many wonderful companies that are out there for you to choose from, so I humbly thank you for choosing Conjure Oils, the little perfume house that could!

Anyway, enough of my sappyness! On to the smellies! It is why we're here, right? While the image can be cool, and the community fun, when it comes down to it, it's about the oils!

The theme for this years Hallows came about as I was researching the history of the Hallows holiday. It's an amazing subject that really showcases humanity's need to reconcile and make sense of the unknown and unknowable. So, without further delay, I present... 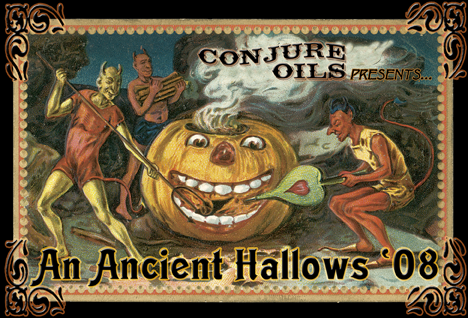 Cythraul is the old Welsh word for demon, or devil, sometimes interpreted to mean Satan. However, in this case, it's being applied more as in naughty little boys and girls who like to play practical jokes and cause mischief during Halloween. Little devils, indeed!

In China, the seventh lunar month, called Ghost Month, is the time of year when spirits of the dead are closest to the realms of the living. On the fifteenth day of the seventh lunar month is Ghost Day, where the gates of Heaven and Hell are opened and ancestors are venerated and tormented souls are soothed. Offerings of food are set out on tables with empty place settings created for spirit visitors. Incense, fine goods crafted from papier mache, Hell money and joss paper are burned - the smoke carrying the offerings and prayers to the dead. Often, illuminated lanterns are set afloat on water acting as a beacon for the deceased to follow and vases of flowers are placed among the photos of remembered loved ones.

On through the orchards to the haunted house you ride as twilight devours the crisp autumn day. You lie on your back, buried deep in the piles of hay. The tractor pulls the cart so slowly that you feel as if you're floating. You look up at the indigo sky; the emerging stars, the rising moon. The wind rustles the changing leaves as you tremble with anticipation of the terror that awaits you at your destination.

hay absolute is rounded out with juicy pippin apples, autumnal air, creaking floorboards and the faintest wisp of smoldering leaves.

The underworld, a land of eternal torment. Home of demons, spirits, damned souls and the devil. Some say Hallows is the devil's holiday, some say that in fall, the gates of hell burst open spewing all sorts of maleficent specters to the four corners of the globe. Some say that hell is cool and gloomy (much like Portland, OR!) Some say it is a fiery furnace. Some say, hell is here and now. Most say it's going to be one heck of a party.

bedeviled black vanilla writhes in a pool of dragon's blood as lamenting leather whips scar the skin of the condemned. Red-hot cinnamon is subdued by brimstone and puffs of smoke.

Originally an ancient celebration of "Oie Houney" or new year's eve, Hop-Tu-Naa is rooted in a tradition that predates Halloween as we know it. On the night of the holiday, the good children on the Isle and Man would go from door to door dressed in frightening costumes bearing turnips and singing Hop-Tu-Naa in hopes of receiving some sweets or a shiny coin. Originally in Manx Gaelig, here are the words in English:

Hop-tu-Naa
My mother's gone away
And she won't be back
until the morning.

This is the scent of a perfect Autumn evening worthy of veneration. Bitter amber blends with warm autumn spices and collides with cool crimson leaves and bright orange calendula blossoms.

Down in the misty bogs and marshes lives Jenny Greenteeth. Her skin is grayish-green, wrinkled and waterlogged. Her hair is stringy and black like seaweed. Her body is old, mangled, contorted. Her joints are swollen and her back is hunched. She waits in the dark on the waters' edge to pull wayward little children to their deaths in the murky deep where she snacks on their flesh and sucks the marrow out of their bones.

I hear that the legend of the Jack-O-Lantern goes this way: In ancient Ireland, an old town drunk by the name of Stingy Jack had tricked the devil from taking him to Hell on several occasions. The first time the devil came to collect Jack's soul, Jack was in his favorite pub enjoying a shot of whiskey. When Stingy Jack saw the devil he insisted that he could not go until his debt to the barkeep was paid. The devil, anxious to get Jack down to Hell, had foolishly turned himself into a coin to pay Jack's bar tab! When Jack saw the enchanted coin he quickly snatched it up and kept the coin in his pocket - along with his silver crucifix, thus binding the devil and keeping his sorry soul safe for ten more miserable years. The second time the devil came to take poor Jack to Hell, Jack pleaded with the devil that he may have an apple to fill his hungry belly before he departs forever to the underworld. Again, Ol' Scratch acquiesces and climbs up the apple tree. Now, Jack may be a drunk, but he is no fool. The devil couldn't get back down from the apple tree - Jack had scattered crucifixes all over the ground! In exchange for his release from the tree, the devil agreed to never take Jack's soul into Hell.

Well, eventually the time came when Stingy Jack's hard living caught up with him and he found himself in front of the pearly gates of Heaven where St. Peter promptly turned him away because of his sinful, unrepentant and debaucherous life. He was sent to Hell where the devil, upon seeing Stingy Jack, was more than pleased to hold up his end of the bargain and never let his soul enter.

Stingy Jack's face must have been a sight because, amazingly, the devil had mercy on sad Stingy Jack and offered him a glowing ember that he had found on the shore near the lake of fire.

Stingy Jack now wanders the earth seeking his soul's final resting place, having his way lit solely by Hell's ember placed inside of a carved turnip.

Because of the limited availability of some of the ingredients in these blends, pips are available only in sets. 10ml available in very limited quantities. Any individual Hallows pips included in an order will be substituted with a pip of sardine oil. Just kidding! However, you will get a random pip in its place.


And resurrected from the 2007 Hallows line:

a gingerbread house decorated with spice drops and butter cream frosting. The faint smell of a witch's brew filling the enchanted woods and roaring cook stove perfect for roasting a greedy little boy or girl.

the Queen disguised herself as a country woman and convinced Snow White to eat the poisoned apple. Too bad she didn't get to just wear the scent.

a midnight walk through the pumpkin patch on All Soul's Eve.

Spiced pumpkin, falling leaves, a black velvet cloak to pull close for warmth and a frankincense candle offering for the spirits residing in the nearby cemetery.

A rare treasure from the Silk Road.

Merely touch the tip of the parasol to the skin of your assailant to render them immobile. Perfect accessory for ladies and ladies of easy virtue alike.
A cyanidic-inspired cocktail - cherry, plum and apricot are cloaked in black vanilla and slathered with bitter almond, tart green apple, d' anjou pear and the tiniest tinge of cassava.

And... there's a brand new (and very lovely, if I do say so myself!) navbar on the site! So many updates, so little time!

Have a great Autumn season and I look forward to hearing from you soon!