The Toby Daye Collection - LIVE in its Entirety! 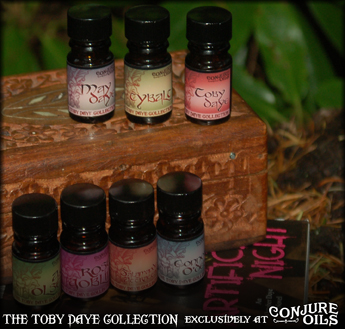 Conjure Oils is thrilled to announce that the Toby Daye Collection - Perfume Oils Inspired by the Writing of Seanan McGuire are now live as a complete line!
Come and have a visit with the fey, won't you?
Love and Bliss,
Vajra
_________________________________________________________________
April O'Leary
Everything about her was yellow, from the faint golden tan of her skin to her wide yellow eyes, shadowed by the green frames of her glasses.  Her irises matched her hair with eerie exactness.  She had the Torquill bone structure; whatever she'd started out as, she was definitely her mother's daughter now.

Ozone burn and the tang of electrical fire.
A.T. Olsen
I stared after him for a long, stunned moment before I groaned, flopping backwards on the bed.  The smell of coffee and clover still lingered in the air, and I had the not entirely unwelcome feeling that things had just gotten a lot more complicated.

Coffee to wake you up, and clover, for luck.  Good or bad, we can't really say.
Connor O'Dell
Take your standard California beach bum, give him spiky brown hair streaked with seal’s-fur gray, brown eyes so dark they verge on black, slightly webbed fingers and a baked-in tan, and you’ve got Connor O’Dell.

Dangerous black amber and Pippin apples, still unspoiled.
Evening Winterrose
The Evening Winterrose I knew had features that looked like the last, perfect work of a dying sculptor, ears that tapered to sharp points and eyes the impossible dark blue of midnight; she had hair that wavered between black and purple, with highlights of pink, orange and blue, like an aurora.  She was wild and terrible and strange, one of the Daoine Sidhe, the fairest of the fae, and she was never, ever human.

Given time enough, Snow White will become a wicked queen.  Roses and the cold, cold taste of snow.
Garden of Glass Roses
White crushed quartz pathways glitter in the sunlight that filters through the roses, throwing up glints of prismatic color.  And everywhere, roses, growing in wild, seemingly unfettered profusion.  Their slight transparency seems odd at first glance, until the mind admits what the eye is seeing: every flower, every petal and bud, is living, blossoming glass, stained with washes of flawless color.

A garden possible only in Faerie.  The sweet scent of roses, mingled with living glass and the slow deep gray of stone.
Gordon
She was roughly five feet tall, with a blaze of white hair cut in spikes that did nothing to hide the squared-off tips of her ears.  Her figure matched her height -- slight, lissome, and easily overlooked.  Judging from her scowl, that happened pretty often; it wasn’t the sort of expression you master in an instant, even when your friends are dying.  Lines cut through her face like scars through granite.  They weren’t wrinkles; she wasn’t old enough for that.  They were just lines, indelibly ground into the shape of her.

Motor oil and the dark, resinous scent of a mechanic's broken heart.
Green Potion
"Try not to get shot again.  You can only have one dose this month."

I looked at the bottle with new respect.  "Or what?"

The treatment is sometimes just as bad as the disease, but smells a lot sweeter.  Pennyroyal, cowslips, and wisteria.
January O'Leary
Her hair was brown with streaks of red, making her look like the victim of a bad dye job.  The combination of that hair with her china-pale skin tagged her as Daoine Sidhe; she had the right sort of artful gracelessness, like she wore the world instead of letting it wear her.

Ozone burn and long, sweet scent of pine.
Lily
Her hands were slim and covered with delicate silver scales, the fingers webbed to the first knuckle.  Only her fingernails looked human, and even they were a pale silver-blue.  I could see the shadow of her face if I turned my head just right, and memory supplied what vision couldn’t: she was impossibly delicate, with jade eyes and long black hair braided back with willow branches, pale skin decorated by dainty silver and green scales.

The Lady of the Tea Gardens bears the wistful scent of hibiscus and water lilies.
Lily's Knowe
I was looking up at a ceiling of woven willow branches, held up by a series of arches that appeared to have grown from the mossy floor.  Pixies clustered on every available surface, their shimmering glow lighting the room.  The moss beneath me was soaking wet, and as a consequence, so was I.  I knew where I was.  Lily's knowe.

The sweet serenity of willows and still water.
Makeshift Morgue

The stairs descended almost vertically into a large, well-lit room.  Judging by the stacks of computer parts and desk furniture lining the walls, they used it for storage before it became a makeshift morgue.  The air was cold and tasted faintly bitter, like machine oil and carpet cleaner.

The bodies have to go somewhere.  The bitter sweetness of motor oil and the ominous citrus cheer of carpet cleaner.
May Daye
She stood about five foot eight, with long, almost gangly limbs and the sort of curves that get lost in anything shapeless.  Her stick-straight brown hair fell to her shoulders, failing to conceal her dully-pointed ears.  She had the sort of pointed face that doesn’t get called “pretty,” even on a kid.  “Striking,” maybe, or “dramatic,” but never pretty.  Her eyes were beautiful, though, large and bright, with gray irises so pale they seemed to echo the colors around them.  I knew those features pretty well.  After all, I saw them in the mirror every morning.  It was like looking at a photograph, only this photograph was answering my open-mouthed shock with a smirk and a tip of an imaginary hat.

The Fetchingly sweet smell of burnt sugar and ashes, like a bonfire on the carnival midway.  Have your ticket ready at the door.
The Queen of the Mists
The Queen had made some changes to her image.  When I brought her the hope chest Evening Winterrose died to protect, the Queen was an ethereal siren, as elegant and regal as a Tolkien wet-dream.  Now she looked like the bastard daughter of Titania and Alice Cooper.  Kohl ringed her eyes, blue lipstick coated her lips, and her formerly floor-length ivory hair was chopped in a ragged bob, streaked with black and vivid blue.  She was wearing fishnet stockings, a ripped white top, and a black leather miniskirt too short to be decent.  But it was her.  There was no mistaking the moonstruck madness in her sea-foam eyes.

Madness and the monarch by the sea.  The scent of frozen salt, as cold and unforgiving as the deep.
The Queen's Knowe
Every hollow hill is different.  The Queen's knowe was a hidden door in a seaside cliff leading to a fairy tale palace as beautiful as it was decayed.  Like an apple hiding rot at its core, its sweetness as soured by its essential nature, and by the nature of the Queen who held it.

Beautiful decay: the smell of the sea and the slow wearing-away of the natural world.
Quentin
Quentin was fostered at Shadowed Hills about a year before I officially came back to Sylvester’s service.  He spends his days at one of the local high schools, learning how the humans live, and spends his nights serving as a page, learning how to be a Faerie noble.  One day he’ll be a squire, then a knight, and finally, his parents’ heir.  A pretty tall order for a kid his age, but I think he can handle it.

The knight in waiting: noble wood, sweet blooming heather and the metallic tang of steel.
Rose Goblin
I spotted my quarry on the second turn: a creature the size and shape of a small cat crouching on the roof of my car, covered in short, soft-looking pink and gray thorns.  Shorter thorns ran down its ears and muzzle, making it look like the bastard child of a housecat and a rose bush.  It looked small, harmless, and completely out of place.  Rose goblin.

The scent of peat moss and roses, fairy gardens, and things often left unseen...
Salamander Attractant
We managed to catch the salamanders before the fire trucks arrived, luring them back out of the flames with sticks of cinnamon wood and myrrh.  The source of the fire was never determined.

Sylvester’s one of the Daoine Sidhe, the first nobility of Faerie.  His hair is signal-flare red, and his eyes are a warm gold that would look more natural on one of the Cait Sidhe.  There’s nothing conventionally pretty about him, but when he smiles, he’s breathtaking.

I backed into the shadows of the bushes, kneeling to run my fingers through the damp grass.  My own magic rose around me, the taste of copper and cut grass hanging in the air until the spell caught hold with an almost-audible "click."  A bolt of pain shot through my temples.  Changeling magic has limits, and those limits make themselves clear when you try to go too far.  I’d mixed a marsh water charm, spun a human disguise, and now I was casting a don’t-look-here on myself.  Put it all together, and it spelled "too far."

Our heroine herself: the sweetness of newly-cut grass mingled with the bloody sharpness of copper, a changeling blend.
Tybalt, the King of Cats
Even in the dim light of the alley, I could pick out the darker bands of brown that streaked his short-cropped, slightly tousled hair, mimicking a tabby’s coat.   His eyes were narrowed, but I knew that if I could see them, they’d be green, split by cat-slit pupils.  Add all that to skin like ivory and the sort of face that winds up on magazine covers, and it’s no wonder that Tybalt’s looks get him a long way with a lot of people.  Not with me.

A cat may look at a King.  A King may look at anything he likes.  Pennyroyal , civet musk, leather and wild honey.
Posted by Vajra at Sunday, January 30, 2011